These papers were donated to the Archives by Dr. Arthur H. Aufses, Jr. in 2007. Dr. Ginzburg’s Jacobi Medal had been given to the Archives in 2005 by the Mount Sinai Alumni. It was placed with these papers. The finding aid was created by Nicholas Webb in 2010.

Leon Ginzburg was born in New York City in 1898. He attended DeWitt Clinton High School and received bachelor's and medical degrees at Columbia University. He served on the house staff of The Mount Sinai Hospital and became an Adjunct Surgeon in 1926.

As an Adjunct Surgeon at Mount Sinai, Ginzburg served under the eminent surgeon Dr. A.A. Berg, who charged him and his colleague Dr. Gordon D. Oppenheimer with reviewing surgical specimens in the pathology laboratory. Ginzburg and Oppenheimer developed a particular interest in diseases of the bowel and began a project to describe and categorize their specimens of bowel tumors and strictures. Of the fifty-two specimens they examined, twelve did not fit any previously described pattern of symptoms1.

At Dr. Berg's insistence, Ginzburg and Oppenheimer shared their research and a draft paper with Dr. Burrill B. Crohn, an Internist who had been collaborating with Dr. Berg on the treatment of two patients with similar symptoms. Crohn made additions to this paper and presented it to the May 13, 1932 meeting of the Gastroenterology section of the American Medical Association. The paper was later published in the October 15, 1932 issue of JAMA. As Dr. Berg declined to be listed as a co-author of the paper, it was published under the alphabetically listed names of Crohn, Ginzburg and Oppenheimer. Dr. Ginzburg, meanwhile, had presented a paper on his and Oppenheimer's findings to the American Gastroenterological Association on May 2, 1932. This paper was eventually published in the 1932 AGA Transactions and (in expanded form) in the December 1933 Annals of Surgery.

These papers introduced the diagnosis of "terminal ileitis," which was later revised to "regional ileitis" and eventually to "regional enteritis." Due to Dr. Crohn's activities in presenting the diagnosis to a wide audience of physicians and the fact that his name was first on the paper, "Crohn's disease" became the name by which regional enteritis was commonly known.

In 1937 Ginzburg became an Associate Surgeon at Mount Sinai. He remained on the hospital staff throughout his career. In 1940 he became Surgical Director of the Harlem Hospital. In 1942 he joined the staff of the 3rd General Hospital, the U.S. Army unit affiliated with Mount Sinai. He served in North Africa and Europe and eventually reached the rank of Major. In 1947 he was appointed director of surgery at Beth Israel Hospital in Manhattan, where he served until 1967.

In 1963 Ginzburg received the Jacobi Medallion from the Associated Alumni of The Mount Sinai Medical Center. Two years later he was elected president of the Alumni Association. A gift from the Gaisman family in 1965 established the Ginzburg Surgery Fellowship at Mount Sinai. Catherine Vance Gaisman had been a Mount Sinai nurse who also served in the 3rd General and they remained close. In 1975 he was honored by Beth Israel with the establishment of the annual Leon Ginzburg Lecture.

Late in life Ginzburg became interested in establishing the record of his role in the description of regional enteritis. In 1974 he published a retrospective article, "The Road to Regional Enteritis," in The Mount Sinai Journal of Medicine, and in the years preceding his death he carried on an active correspondence on this subject. Ginzburg died in Manhattan in 1988.

The majority of this collection consists of material regarding Dr. Ginzburg's efforts to document his role in the discovery and description of regional enteritis. Correspondence with numerous younger surgeons (folder 2) and with the editor of Gastroenterology (folder 13) document Ginzburg's interest in recording this story for posterity. He would frequently provide correspondents with a set of five exhibits (folders 3 through 7) supporting his claims.

Dr. Ginzburg's interest in the history of The Mount Sinai Hospital is represented by a small assortment of handwritten notes and by the typescript of an undated speech recounting the Hospital's history from 1905 to 1941. His outstanding reputation as a "surgeon's surgeon" is documented by a copy of the remarks delivered by Dr. Ralph Colp on the occasion of the establishment of the Ginzburg Surgery Fellowship in 1965. The collection also contains an assortment of Dr. Ginzburg's reprints on regional enteritis and various other medical subjects.

Restriction Note: The collection contains several pages of medical records from 1930 that document Dr. Ginzburg's treatment of a patient suffering from what would eventually become known as regional enteritis. Because they contain personal health information, these records are closed. 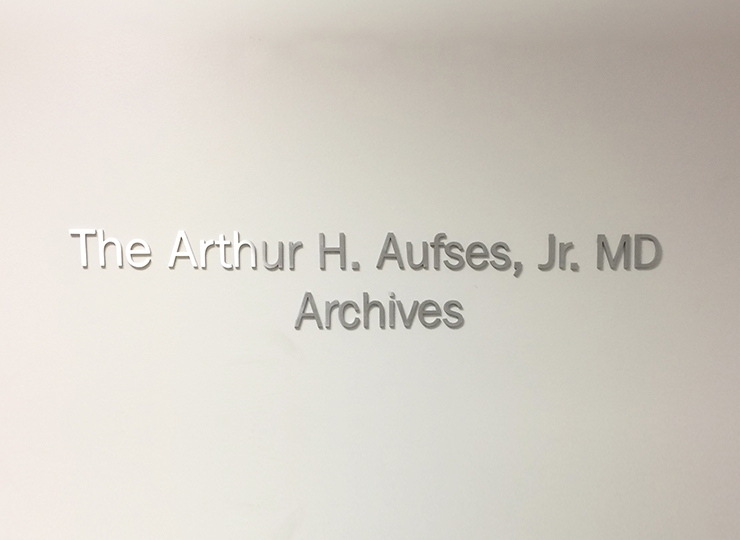