She is a member of professional and honorary societies including Society for Pediatric Research, American Society for Clinical Investigation, Association of American Physicians, American Society of Human Genetics, American Cleft Palate-Craniofacial Association, Johns Hopkins Society of Scholars, and Practitioners’ Society of New York. She served as President for the American Chinese Geneticist Association (1996-1997), President of the Society of Craniofacial Genetics (1996-1998), and Chair of the Professional Ethics Committee for the American Society of Human Genetics (2004-2006). She is a member of The Smile Train Medical Advisory Board, Moebius Syndrome Foundation Scientific Advisory Board, Born A Hero: Pfeiffer’s Health & Social Issues Awareness Medical Board. She has been a research advisor to several institutes of the National Institutes of Health and a standing member of the Genome Study Section (1996-1999), Board of Scientific Counselors for the National Institute of Dental and Craniofacial Research (2000-2004), and Genetics of Health and Disease (2007-2011). She was on the editorial board for the Pediatric Research, Journal of Craniofacial Genetics and Developmental Biology, and Genetics in Medicine and the book, Principles of Molecular Medicine. She has authored more than 200 peer-reviewed publications and 50 chapters and reviews.

She is the director of the Interdisciplinary Training in Systems and Developmental Biology in Birth Defects of the Mount Sinai Graduate School of Biomedical Sciences.

She is a clinical geneticist and serves as an attending in medical genetics in the General Genetics Clinic and the Cleft and Craniofacial Clinic at the Mount Sinai Medical Center. 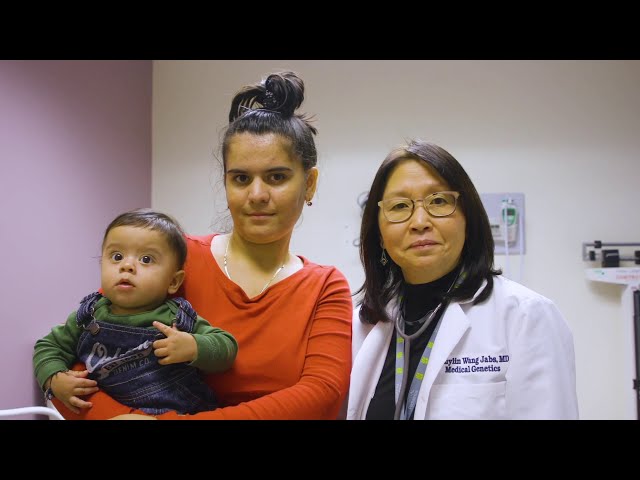 Birth defects occur in approximately five percent of newborns, and there are more than 700 inherited conditions with craniofacial and limb abnormalities. The research focus of Dr. Jabs' laboratory is to increase our understanding of the molecular basis of human malformation disorders including Crouzon, Apert, Treacher Collins, Moebius, Goldenhar, oculodentodigital, and Roberts syndromes. Mutations for syndromic craniosynostosis, cleft lip and palate, and mandibulofacial dysostosis conditions were identified in homeobox and helix-loop-helix transcription factors, growth factor receptors, connexins, and cohesion proteins. Current experimentation involves gene expression and protein interaction studies in animal model, biochemical, and cellular systems including induced pluripotent stem cells. These studies are elucidating the pathogenetic mechanisms of these mutations, signaling pathways and networks involved in normal and abnormal developmental processes, and phenotype-genotype correlations. Population association studies are being conducted on non-syndromic congenital anomalies such as isolated craniosynostosis and cleft lip with or without cleft palate. Based on these findings, therapeutic strategies are being tested in animal models to ameliorate abnormal craniofacial morphology. Her group is surveying the impact of these malformation conditions on the psychological well-being of the patients and their families.

She has also initiated a research program to evaluate genetics and genomics education for primary care physicians and the community served by Mount Sinai Center regarding the genetics of complex diseases, such as diabetes, coronary artery disease, cancer, and osteoporosis.

Below are financial relationships with industry reported by Dr. Jabs during 2021 and/or 2022. Please note that this information may differ from information posted on corporate sites due to timing or classification differences.