Previously, he was on the faculty of the departments of Pathology and Medicine at Columbia University. He was named Assistant Professor in 1995 and later became the Avon Foundation Chair for Breast Cancer Research in 2002. He was named Professor in 2007 and Leader of its Breast Cancer Program at the Herbert Irving Comprehensive Cancer Center in 2005.   Dr. Parsons is a member of the National Academy of Medicine, American Society for Clinical Investigation, American College of Physicians. He was Chair of the AACR Special conferences committee for two terms from 2011-2017, which initiated and planned more than 75 scientific meetings on different cancer-related topics.

Dr. Parsons maintains an active laboratory and has received multiple awards for his research, including the 2011 American Association for Cancer Research (AACR) Outstanding Investigator Award for Breast Cancer Research. He is internationally recognized as an expert in the fields of cancer genetics and signal transduction with an emphasis on tumor suppressor genes including PTEN. 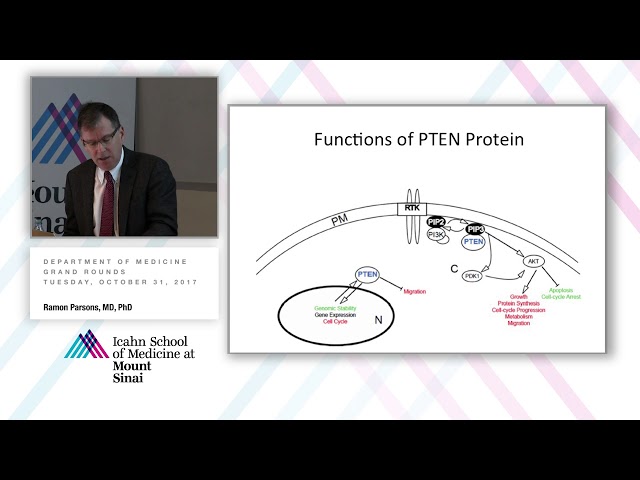 The Parsons laboratory seeks to investigate tumor suppressor and oncogene signaling pathways that are altered in human solid tumors using a multidisciplinary approach that includes genetics, biochemistry, bioinformatics, and pathology.  Thematic topics that are currently under investigation include dissection of the regulation and function of the PTEN tumor suppressor, determination of the impact of altered PTEN signals in cancer progression and altered energy metabolism, molecular pathogenesis of breast carcinoma initiation and progression, and examination of epigenetic and chromatin reprogramming as consequence of altered cancer signal pathways.  Past accomplishments include discovery of PTEN, elucidation of the frequent alteration of the PI3K/PTEN pathway in a wide variety of cancers, generation of mouse models of cancer due to PTEN mutation, and identification of PREX2 as a regulator of PTEN function.

Below are financial relationships with industry reported by Dr. Parsons during 2022 and/or 2023. Please note that this information may differ from information posted on corporate sites due to timing or classification differences.