Alison M. Goate, DPhil, is the Jean C. and James W. Crystal Professor of Genomics, Chair of the Department of Genetics and Genomic Sciences, Professor of Neuroscience and Neurology, and faculty of the Icahn Genomics Institute at the Icahn School of Medicine at Mount Sinai. She has worked on the genetics of neurodegenerative diseases including Alzheimer’s disease (AD) and Frontotemporal Dementia (FTD) since 1987, and is the founding director of the Ronald M. Loeb Center for Alzheimer’s Disease at Mount Sinai.

Over the last three decades, Dr. Goate has been part of many gene finding teams that have successfully identified disease-causing variants for both AD and FTD. While working at Imperial College in London, she reported the first mutation to cause familial Alzheimer’s disease, and her early studies at Washington University in St. Louis identified a genetic mutation in Colombian families that are now part of the Alzheimer’s Prevention Initiative clinical trial. Her lab was also part of the team that first reported MAPT mutations in FTD.

Dr. Goate is also a leader in the study of late onset AD genetics using integrative genomic approaches to identify novel genetic risk factors. Her work led to the identification of Trem2 as a risk factor for AD and has highlighted the enrichment of AD risk variants in microglial enhancers, regulatory elements in DNA that control gene expression in immune cells of the brain. Dr. Goate is now building upon these insights using genome editing in induced pluripotent stem cells to understand the molecular mechanisms of disease and to develop novel therapeutics.

Dr. Goate has received the Potamkin Award from the American Academy of Neurology, the Khalid Iqbal Lifetime Achievement Award from the Alzheimer’s Association, the Rainwater Prize, and the MetLife Award for herresearch on AD. She was elected a fellow of the American Association for the Advancement of Science in 2012, and a fellow of the National Academy of Medicine in 2016. 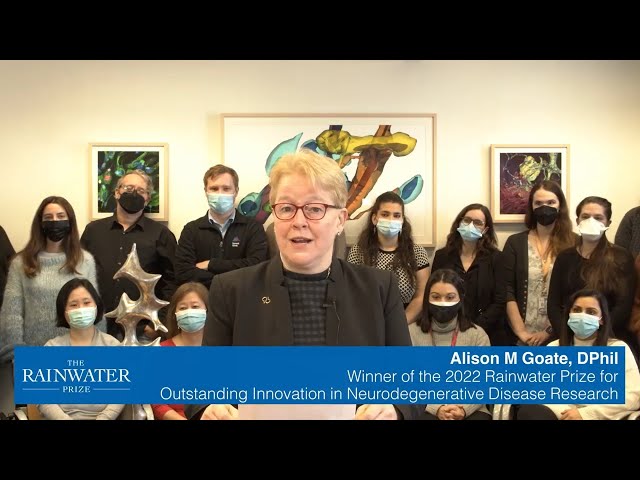 Research in our laboratory focuses on dementia (Alzheimer's disease & frontotemporal dementia) and addiction (alcohol dependence). In each of these projects our goal is to understand the molecular basis of disease in order to identify novel targets for therapeutic development. We use genetic and genomic approaches to identify susceptibility alleles, this work includes integration of multiple levels of OMICs data with genetic data from genome wide association studies and whole genome/exome sequencing in families multiply affected by disease and in case control cohorts. Through these studies we have demonstrated an enrichment of AD risk variants in microglial enhancers. Interestingly variants within the SPI1 (PU.1) locus, a gene which regulates myeloid cell differentiation, influence risk for AD and for alcoholism, demonstrating the importance of neuroimmune communication in both disorders. We are currently pursuing these observations in cell and animal models with the goal of developing PU.1 inhibitors for treatment of AD. In combination with our genetic studies we use induced pluripotent stem cells in vitro and in vivo to study the mechanisms of risk underlying the AD risk genes. To date we have performed functional studies of APOE, SPI1 and MS4A4A/6A in induced microglia. We also have an extensive program studying the functional consequences of MAPT mutations and haplotypes in tauopathies such as PSP and FTD, using iPSC-derived neurons and organoids.

Below are financial relationships with industry reported by Dr. Goate during 2022 and/or 2023. Please note that this information may differ from information posted on corporate sites due to timing or classification differences.