Located in the heart of one of the most dynamic cities in the world, the Mount Sinai Health System provides ready access to renowned art institutions, cultural events, parks, restaurants and more. In New York City, you’ll discover countless ways to enjoy your free time.

The City at Your Front Door

Enrichment opportunities are endless in the city that never sleeps.  Whether walking, biking, or using public transportation, these enticing activities include:

“We are New Yorkers. Proud citizens of the greatest city on earth. Thinking big isn't new to us. It is the very foundation of who we are.” – Bill de Blasio, Former Mayor of New York City

With more than 800 acres of athletic fields, gardens, lawns, bike and running paths, you can easily pass hours in Central Park. Located at the center of New York City between 59th and 110th Street, with each side stretching from the east to the west side of Manhattan, seasonal activities include:

Morningside Park is home to multiple playgrounds, baseball fields, and basketball courts, but its most noteworthy element is its arboretum—a botanical garden featuring a diverse array of plants and trees. Located between 110th and 123rd Street on Manhattan’s upper west side, this park is also the perfect venue to bring your dog to play with other friendly canines off leash at the Morningside Dog Run.

Riverside Park, located along the Hudson River, is New York City’s longest park. Totaling 53 blocks, this park features a promenade lined with honey locusts, and is situated between 72nd and 125th Street. A key section of the even more expansive Manhattan Waterfront Greenway, New Yorkers use Riverside for uninterrupted walking or cycling. It is also the final resting place of famed Civil War general and U.S. president, Ulysses S. Grant.

From expansive outdoor experiences to unrivaled cultural enrichment, New York City offers something for everyone. The Mount Sinai Health System is proud to be at the center of such a diverse and rewarding environment, providing exceptional healthcare every day. 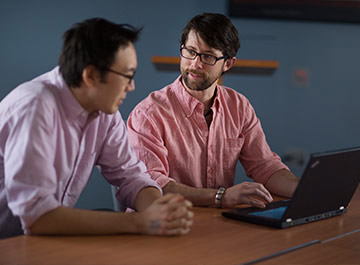 An abundance of support and resources for students

The Graduate School of Biomedical Sciences