Brain disorders affect up to one billion people worldwide. One of the most compelling areas of medical research is aimed at understanding the human brain and what goes wrong in disease.  Research using brain tissue donated following death has allowed researchers to answer important questions about many brain diseases such as autism, Alzheimer's, schizophrenia, Parkinson's, and Huntington's. For example, much of what is known about the biology of Alzheimer’s disease was determined from studies using human brain tissue.

Scientists are now also using brain tissue to investigate the effects of traumatic brain injury, and the genes involved in disorders such as schizophrenia, depression, autism, and multiple sclerosis.  Brain tissue collected following death is necessary to conduct research on human brain diseases. This tissue is made freely available to qualified researchers through resources called brain banks, or brain tissue repositories, which acquire, store, and distribute it. As methods for studying genes and proteins, and how they influence growth, behavior, development, and disease become more powerful, the availability of brain tissue becomes even more important.

Discoveries made possible by tissue donation provide hope to families affected by brain disease. A limit in the number of donors slows our progress in understanding brain diseases. Studies using donated brain tissue following death are the most promising avenue for researchers to learn how to prevent and cure disorders of the brain.

One donated brain can provide tissue for hundreds of independent research studies. The gift of brain donation enables discoveries that will have a lasting impact. The legacy of donation offers future generations the possibility of improved health.  While this research depends on tissue from persons diagnosed with conditions affecting the brain, there is also great need for brain tissue from persons unaffected by brain disease. Characterizing brain tissue from healthy individuals and unaffected family members offers a way to identify and understand the changes that result in disease and importantly, why some who may be at risk never develop symptoms. 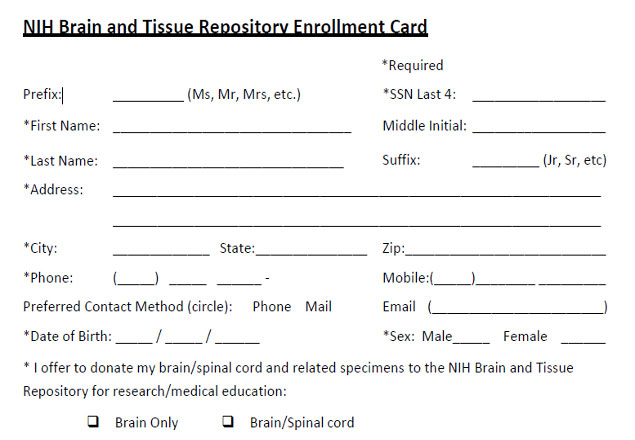