Learn About Our Fellowship

Hear from a current fellow, faculty, and the program directors.

“Coming from a place of humility and curiosity is so important, and that’s something that really was encouraged by my mentors and attendings here at Mount Sinai”
- Joshua Choi, MD, Chief Fellow

Originally from Colombia, Dr. Castañeda completed medical school at Del Rosario University located in Bogota. He subsequently completed residency at Lincoln Medical and Mental Health Center in NYC. His clinical interests include autism spectrum disorder, mood disorders, and ADHD. During his residency, he authored various posters and publications including a systematic review of electroconvulsive therapy for treatment resistant depression in children and adolescents that was published in the European Journal of Child and Adolescent Psychiatry. Outside of work, he enjoys exploring the city, exercising, traveling, and watching/playing soccer.

Dr. Frankel grew up just outside NYC in the North Jersey suburbs and is thrilled to be returning home for fellowship. He completed his undergraduate education at The College of New Jersey, where he obtained his BA in Psychology. He went on to complete medical school in Philadelphia at the Philadelphia College of Osteopathic Medicine and later completed his residency at Thomas Jefferson University Hospital, where he served as inpatient chief resident during his third year. Dr. Frankel's clinical interests include neurodevelopmental disorders, LGBTQ mental health, psychotic disorders, and eating disorders. Outside of work, Dr. Frankel enjoys singing and playing guitar, consuming far too much iced coffee, and quick getaways to the Hudson Valley and down the shore.

A desert girl at heart, I grew up in Arizona surrounded by mountains which is where my love of hiking and outdoors started. Though I may now be considered a New Yorker as I have lived in the city for 15 years. After college I worked in the city in cancer research for many years while I also obtained my Master’s in Biology from NYU. I then attended the New York Institute of Technology College of Osteopathic Medicine where I first fell in love with psychiatry. For residency, I attended SUNY Downstate for my general psychiatry training. I became involved with advocacy work through AACAP, attending the annual legislative conference where I presented an important bill which supports mental health access for BIPOC communities to Senator Schumer’s office. As I said I love the outdoors, and even did a month-long NOLS wilderness medicine backpacking trip in New Mexico as my last month of medical school. Other favorite pastimes include traveling off the beaten path, baking elaborate cakes, and spending time with my family.

Dr. Kaplan graduated Cum Laude with a bachelor's degree in biomedical engineering from Tulane University in New Orleans. He then moved to Washington Heights where he worked for the non-profit StandWithUs before matriculating at Rutgers NJMS for his doctoral studies. Dr. Kaplan stayed at Rutgers for his residency training and developed a research interest in clinical applications of nature as therapy. While in residency he served on the University Hospital Quality Improvement Steering Committee, was co-chair of the Psychiatry Program’s Communications Committee, Course Lead for the NJMS Preclinical Psychiatric Curriculum and Co-directed the 2021 Urban Mental Health Conference. He is honored to serve as a 2022 PRITE Fellow for Child and Adolescent Psychiatry through the American College of Psychiatrists. Throughout his medical training, Dr. Kaplan was involved in community outreach and education programs as a frequent presenter through Rutgers Project Echo, Minimed, and the SMART program. In his free time, Dr. Kaplan enjoys exploring the outdoors, creating art, or practicing karate.

Dr. Kroppmann, born and raised on Long Island, New York, received his bachelor’s degree from New York University with a major in psychology and minors in Biology and Russian and Slavic Studies. He went on to become a research assistant at the Psychophysiology Laboratory at the New York State Psychiatric Institute where he utilized EEG to study schizophrenia and depression. He obtained his medical degree at George Washington University SMHS where he gained experience in applied community health and initiated the development of the university’s first student-run free mental health clinic through completion of the Community/Urban Health Track. Dr. Kroppmann then joined the psychiatry residency at Mount Sinai Morningside and Mount Sinai West. During his free time he enjoys hiking, Taijitsu, Kenjutsu, swing dance and mixology.

Naomi Liang, MD, is a psychiatry resident at Mount Sinai Morningside-West in New York City. Born in Honolulu, Hawaii, she received her Bachelor of Arts in philosophy from Swarthmore College and her medical degree from the John A Burns School of Medicine at the University of Hawaii at Manoa. Her clinical interests include child and adolescent psychiatry, early childhood trauma, and cross-cultural psychiatry. She also has particular interest in adult and child psychoanalysis, and is currently in training at the New York Psychoanalytic Society and Institute.

Dr. Patel is born and raised in northern NJ. She completed undergraduate in Cell Biology and Neuroscience with a minor in Psychology at Rutgers University. She continued on to Robert Wood Johnson Medical school and completed Psychiatry residency at Temple in Philadelphia. Dr. Patel is passionate about addressing disparities in mental health as well as the healthcare system, specifically within the underserved populations that she has worked with extensively thus far in her training. Her passion developed as she became the resident chair of the Diversity and Inclusion Committee at Temple. Outside of work, she loves spending time with her golden doodle, Simba, and exploring new restaurants in the city with her fiancé.

Dr. Jangda, originally from Long Island, moved across the world after high school to attend medical school at Ziauddin University in Karachi, Pakistan. He subsequently worked as a clinical researcher at the Zucker Hillside Hospital, with emphases on adolescent mood disorders and negative symptoms in schizophrenia. He then joined psychiatry residency at SUNY Downstate, during which he became involved in state and federal mental health advocacy, joining the American Academy of Child and Adolescent Psychiatry Advocacy Liaison Network and promoting increased access to mental health care. He also co-led a support group for intensive care unit and emergency department nurses during the COVID-19 pandemic, in addition to training in psychodynamic psychotherapy at the Psychoanalytic Association of New York. Dr. Jangda spends his free time traveling with his wife, exploring museums, reading, and watching Manchester United soccer matches.

A native New Yorker, Dr. Lin completed medical school at New York Institute of Technology College of Osteopathic Medicine and residency at Nassau University Medical Center. Her clinical interests include psychotherapy, social media’s impact on youth, and mental health advocacy for ethnic minorities. Prior to residency, Dr. Lin graduated with a BA in Anthropology from New York University, with a minor in East Asian Studies. Outside of work, she enjoys art, video games, science fiction, traveling, yoga, and skincare.

Dr. Seoane completed her undergraduate education at Fordham University, at which time she initially found her interest in the field of psychiatry while volunteering on a research project comparing the effectiveness of various psychotherapy modalities in the treatment of panic disorder at New York-Presbyterian Hospital. She completed her medical education at Zucker School of Medicine at Hofstra/Northwell and went on to residency training at Albany Medical Center. During residency, she has worked on a project assessing health care providers’ comfort in management of agitation in pediatric population and implementing interventions to increase their comfort level. Outside of work, she enjoys running, traveling, and music.

Dr. Stein is a native New Yorker who received his bachelor’s degree in philosophy and political science from Rice University. He went on to complete a master’s degree in philosophy and public policy at the London School of Economics. While in graduate school he became interested in transitioning from the theoretical study of health policy to the more tangible experience of working with patients. During his residency training, Dr. Stein became fascinated with the intersection of addiction and child and adolescent psychiatry as he worked with many adult patients who had developed substance use disorders as adolescents. Outside of work, he enjoys reading history books, exercising, listening to progressive rock music, and following the NBA and NFL.

Dr. Wang is a native New Yorker who completed her medical degree at SUNY Stony Brook and her residency at Mount Sinai Beth Israel. Her clinical interests include autism spectrum disorder, child neuropsychiatry, cultural psychiatry and LGBTQ mental health. In medical school, she participated and published in translational research on the molecular biology of rare genetic disorders and volunteered with pediatric populations in both clinical and community settings. She continued her interest in research through residency, authoring various posters and publications as well as presenting a clinical seminar through the American Academy of Child and Adolescent Psychiatry on mental health disparities in Asian American LGBTQ youth. Dr. Wang can be found spending her spare time playing her guitar, drawing, or shooting hoops on a neighborhood court.

Dr. Zarkar received her bachelor’s degree in Biological Sciences from University of California, Irvine and medical degree from Touro College of Osteopathic Medicine. Her interest in psychiatry grew during a summer spent at a refugee camp in Torbat-e Jam, Iran, near the border of Afghanistan. There, she experienced first-hand the trauma and psychological impact forced migration can have on an individual and their loved ones. Dr. Zarkar went on to residency at Mount Sinai Morningside, where her interest in child psychiatry, global mental health, and trauma-related pathology grew. In her spare time, Dr. Zarkar can be found running in Central Park, waiting for the next true-crime documentary on Netflix, or planning her next travel adventure.
Research Track Fellow

A native New Yorker, Dr. Rahman completed his undergraduate education at the Macaulay Honors College of the City University of New York at Hunter College, obtaining his BA in biology and political sciences. He went on to attend the Albert Einstein College of Medicine where he completed a one-year research fellowship studying autism spectrum disorder. He then completed his residency training at the Nassau University Medical Center, where he served as Chief Resident for Academics and Research as well as Chair of the Resident Council, a role which enabled him to advocate for resident wellness and safety during the COVID-19 pandemic. Beyond the academic realm, Dr. Rahman enjoys discovering new restaurants, traveling, spending quality time with his cat Mittens, and enjoying outings with his friends and family. 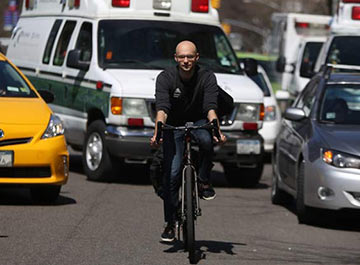 Live in one of the world’s most vibrant cities