The Division of Gastroenterology in the Department of Medicine has a multitude of research initiatives currently underway.

Identifying rare variants in IBD
Genome-wide association studies have identified over 200 loci associated with IBD. We now seek to identify rare variants, of potentially greater functional and statistical effects that may be associated within select populations and families multiply-affected by IBD.

Cell-type specific deconvolution of intestinal tissue mixtures improves expression quantitative trait loci mapping
RNASeq analyses of intestinal biopsies may prove to be one of the most important biomarkers in IBD. However, such data need to be interpreted in the context of sampling variation and cellular heterogeneity. Towards these ends, we are determining to what extent major differences (e.g. principal components vectors) correlate with cellular fractions as estimated by analytic deconvolution.

Reactive oxygen species pathways and regulation of intestinal epithelial gene expression and function.
We have identified a number of rare variants along the ROS pathway that are nominally associated to ulcerative colitis and may play a particularly important role in intestinal epithelial function. We seek to define the role that ambient oxygen levels, context specific (i.e. from inflamed vs. uninflamed) bacterial and epithelial supernatants play in UC enteroid function generally, and stratified by genes of interest.

Population differences in epigenetics of intestinal cells
A major recent advance has been the demonstration that for almost all IBD-associated loci harboring common variants, the directionality of risk alleles is positively correlated between European ancestry, Asian and African populations. Fine-mapping efforts of IBD-associated loci have demonstrated an enrichment of GWAS signals within cell-specific enhancers. The extent to which the epigenetic landscape, as defined by ATAC-Seq is similar between African-American and European ancestry IBD patients within major intestinal cell types (epithelium, myofibroblasts, major immune cell subtypes) will be evaluated.

Personalized IBD: the role of microbiome diversity in intestinal inflammation
In this proposal, we aim to understand the role of interpersonal variation in the microbiome on disease susceptibility in animal models replicating features of IBD. In particular, we will colonize these animals with the gut microbiota of humans with and without IBD to determine if differences in microbiome composition lead to differences in disease severity

Unraveling the pathogenesis of microscopic colitis
Microscopic colitis (MC) is an inflammatory bowel disease presenting with chronic, non-bloody watery diarrhea and few or no endoscopic abnormalities. Diagnosis is based on histology. Microscopic colitis embraces two different forms: collagenous colitis and lymphocytic colitis. The cause of MC is unknown, but most likely involves a specific mucosal immune response to luminal factors in predisposed individuals. The aim of this study is to propose a systematic approach looking at the association of genetic variants with MC.

An Open-Label, Phase 4 Study to Evaluate the Efficacy and Safety of Triple Combination Therapy with Vedolizumab IV, Adalimumab SC, and Oral Methotrexate in Early Treatment of Subjects with High Risk Crohn’s Disease.
This study will explore for the first time the efficacy and safety of a combination of two biologics with methotrexate in inducing and maintaining deep remission in patients with early Crohn’s disease with predictors of bad outcome.

PREDICTS: PRoteomic Evaluation and Discovery in an IBD Cohort of Tri-Service Subjects study
Explanation: A multi-collaborative project that takes advantage of the Department of Defense serum repository allowing to study pre-diagnosis samples. Proteomic markers, antimicrobial antibodies, viral markers, among others will be measured in serum before diagnosis, allowing to identify relevant changes occurring before diagnosis, that can provide insight to key pathophysiological events ocurring before IBD.

Interplay of TNF and dysbiosis in the pathogenesis of IBD
Explore the interaction between the host mucosal immune system and microbes, both at the epithelial cell surface and within the gut lumen.

Define the contributions of the genes and the microbiome to the development of UC
Define how mutations in specific genes increase the risk of UC.

MECONIUM: Exploring MEChanisms Of Disease TraNsmission in Utero through the Microbiome
Explanation:  The MECONIUM Study is a prospective study aimed to investigate the role of IBD on pregnancy and baby’s microbiome. Clinical data, stool and saliva samples are collected from women with and without IBD during pregnancy. Serial stool samples are collected from the newborns. The impact of IBD in newborns microbiome formation is explored.

Progression of Dysplasia in PSC-IBD
Explanation: PSC is the highest risk factor for developing associated neoplasia. Few studies have focused on the rate and predictors of dysplasia progression in this group of patients. The impact of the liver disease (drugs, liver transplant, etc) will be assessed.

CIVIC: Corticosteroids with Vedolizumab in Crohn’s Disease
Explanation: A randomized controlled trial to determine whether patients with Crohn’s disease who are initiating treatment with vedolizumab have better outcomes with the addition of a short course of prednisone at initiation.

OSCCAR: The Ocean State Crohn’s & Colitis Area Registry
Explanation: A community-based inception cohort of patients with Crohn’s disease and ulcerative colitis, based in the state of Rhode Island. A series of published and ongoing substudies utilize this resource, rich with clinical data and biospecimens.

GED-0301 (Mongersen) in Crohn’s Disease
Explanation: A randomized double-blind, multi center study to explore the effect of the novel investigational agent, GED-0301 on endoscopic and clinical outcomes in subjects with active Crohn’s disease

A Randomized, Double-Blind, Double-Dummy, Multicenter, Active-Controlled Study to Evaluate the Efficacy and Safety of Vedolizumab IV compared to Adalimumab Subcutaneously in Subjects with Ulcerative Colitis
Explanation: Vedolizumab, an anti-alpha4beta7 integrin antibody, is being compared directly to adalimumab, an anti-TNF antibody, in treating patients with ulcerative colitis. This is the first blinded, controlled comparison of two biologic agents of different classes.

PUCCINI—Prospective Cohort of Ulcerative Colitis and Crohn’s Disease Patients Undergoing Surgery to Identify Risk Factors for Post-Operative INfection I
Multi-center study funded by the Crohn’s & Colitis Foundation of America to determine risk factors for post-operative infection in IBD patients undergoing surgery.  This is the first large prospective study to explore the peri-operative infection risk associated with biologic treatment exposure as measured by drug levels. 1000 patients will be enrolled and Mount Sinai is the lead site for the study.

Examining functional consequences of MAdCAM-a4b7 interaction
Explanation: Translational and basic investigations of the impact of MAdCAM signaling on the differentiation and function of T cells

Discovering novel pathways of cellular homing to the colon
Explanation: Basic and translational investigations to define novel receptors involved in cellular recruitment to the large intestines.

Treating IBD in the Cancer Patient
This study explores the effect of IBD medications on the development of new and recurrent cancer in patients with IBD and a history of cancer.

SAPPHIRE Registry: Safety of Immunosuppression in A Prospective Cohort of Inflammatory Bowel Disease Patients with a HIstoRy of CancEr.
This study examines whether IBD with a history of cancer who get exposed to immunosuppressive medications are at greater risk of new or recurrent cancer compared to controls who are not exposed.

The Role of LRRK2 in the Microbiome Composition and the Process of Autophagy in Human and Animal Models
Using an exome sequencing-based semi-custom array, we detected novel Crohn’s disease (CD) association signals in the LRRK2 gene at the non-synonymous mutations N2081D, conferring CD risk, and N551K, a protective variant. The goal of this study is to determine whether LRRK2 N2081D and N551K are functional variants directly involved in CD pathogenesis by investigating their role in the bacterial composition and the process of autophagy using human and animal models.

Systems Biology Approach to IBD
Next-generation technologies that measure biological parameters on a genome-wide scale (“omics” data) are continuously being refined and offered at ever-decreasing costs. Nevertheless, our understanding of disease is still limited because the susceptibility loci do not necessarily inform on how the biological processes cause a disease. New approaches are being developed to maximally integrate information from the enormous amount of data generated from these technologies to uncover biological processes. Our goal is to identify novel genes, pathways, and networks associated with IBD, ultimately resulting in the identification of the best targets for improved diagnostics and therapeutics.

Microarchitecture and Pathological Classification of Small intestinal Strictures in Crohn’s Disease
Recent advances in the anti-inflammatory therapy of Crohn’s disease have had little impact on the incidence or therapy of intestinal strictures, one its leading complications.  This observation likely reflects a lack of insight into the pathophysiology of the development of intestinal strictures.  Our goal is to analyze the microscopic morphology of small intestinal Crohn’s strictures as a basis for pathological classification, investigation into their pathophysiology, devising preventive and therapeutic strategies and fostering improvements in diagnostic imaging modalities.

The Impact of anti-TNF Exposure on Vedolizumab Effectiveness: A Biomarker Study
A prospective observational cohort study to explore differences in safety and efficacy of Vedolizumab in patients with inflammatory bowel disease that are naïve to anti-TNF and in those with previous anti-TNF exposure. The goal is to identify pharmacodynamic biomarkers that predict responsiveness to vedolizumab.

Assessing Transition Readiness in Pediatric IBD Patients
The transition from pediatric oriented care to adult oriented care for adolescents with IBD can be a very stressful time in the lifecycle of an IBD patient. Health care utilization and adherence to medications can be negatively impacted if the patient is not ready to transition to more automatous care. In this study we will be assessing what barriers exist that can impact a successful transfer and provide educational tools to improve readiness.

The Role of Small Bowel Ultrasound in assessing therapeutic response to Anti-TNF therapy
Small Bowel ultrasound has been used in Europe and Canada to assess for disease activity and for diagnostic purposes. In a new treat to target paradigm small bowel ultrasound is a non-invasive modality that can determine the effectiveness of therapy early so to be able to adjust therapy to optimize the target of mucosal healing. If accurate, small bowel ultrasound will be implicated in standard of care practice.

Road to Prevention: Defining the Preclinical State of IBD
The overall objective of this Multiplex Families Studyis to develop a predictive biomarker panel based on the discovery of the specific genetic, serologic and/or microbial alterations that occur in high-risk individuals prior to the onset of IBD that can inform rational preventative or very-early interceptive strategies. Studying individuals at high risk for disease based on familial risk can thus offer insight into early events in disease pathogenesis and help differentiate biomarkers that precede disease from those that occur as a response to disease and those that are protective vs. at risk. The ultimate goal will thus be to prevent the chronic inflammation and its consequences by targeting the pre-clinical phase of the disease, when intervention on causative or triggering factors could stop further development of the disease. 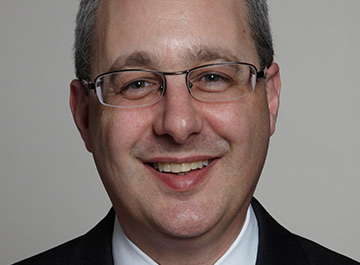 Bruce Sands, MD, MS, is the Dr. Burrill B. Crohn Professor of Medicine and Chief of the Dr. Henry D. Janowitz Division of Gastroenterology. Read More