Medicine’s interest in the kidney is longstanding, as it is tied to one of the few substances – urine - that could be studied and measured with the tools available at almost any given point in time. Mount Sinai has a rich nephrology history, including various clinical breakthroughs associated with it. In 1917, Albert A. Epstein described the causation and treatment for edema in chronic parenchymatous nephritis, ever after known as Epstein’s disease. Many pioneering programs in dialysis and urology that followed focused their research on the kidney. Still, it would be more than 40 years before a separate division of Nephrology was created.

After World War II, Dutch physician Wilhelm Kolff was invited to The Mount Sinai Hospital to train physicians in the use of his newly developed artificial kidney. In 1947, the first hemodialysis in the United States was performed at Mount Sinai. When Kolff left Mount Sinai, his artificial kidney remained at the institution, where it continued to fascinate residents and young physicians on the staff, including Alfred P. Fishman, Irving Kroop, and Stephan Rosenak from Urology.

In 1957, a “proper facility” for dialysis was built at Mount Sinai, the first such service in New York City. This was led by Dr. Sherman Kupfer, who spent his career at Mount Sinai and made several contributions to the study of kidney disease. This increasing clinical activity led to the creation of a formal Nephrology Division within the Department of Medicine in 1959. Dr. Marvin F. Levitt was named the first Director of the Division. He had trained with the father of modern Renal Physiology, Dr. Homer Smith. Levitt soon created the Fellowship Program in Renal Disease, as well as an outpatient clinic, which followed kidney patients.

The research program initially focused on problems of fluid and electrolyte balance, renal hemodynamics, and the action of diuretics. Studies in man and animal were designed to analyze the pathophysiologic basis for a variety of common clinical conditions. As the program evolved, micropuncture techniques were employed to study renal uric acid transport and the pathophysiology of acute renal failure.

Over the years, the use of renal dialysis increased and the Division cared for many patients with chronic renal disease. This led to Mount Sinai’s creation of a kidney transplant program, with the first operation – a success - performed in 1967. In 1977 the Robert Wood Johnson Jr. Renal Treatment Center opened as a joint program with the Department of Surgery. The Division has led in the development of innovations in the performance of CAVH, peritoneal and hemodialysis. The first clinical use of continuous arterio-venous hemofiltration was at Mount Sinai.

Richard Stein was named Chief of the Division when Dr. Levitt stepped down in 1989.  He was followed by Paul Klotman in 1994, who was named Mount Sinai’s Chairman of Medicine in 2001, the second nephrologist to be named Chair (Alexander Gutman was the first, serving from 1952-74). At that time, Barbara Murphy was designated as the new Chief of Nephrology and she continues to serve today. Graduates of the Fellowship Program have risen to national prominence as professors, division chiefs, and heads of departments, including the Division of Kidney, Urologic and Hematologic Diseases of the National Institutes of Health.

The Division of Nephrology and Hypertension at Mount Sinai Beth Israel was formed over 25 years ago, when E. Lovell (“Stretch”) Becker was chairman of the Department of Medicine, to care for the rising number of patients with kidney disease on the Lower East Side of Manhattan. The division expanded and opened a research laboratory and a dialysis unit for both acute and chronic kidney disease. 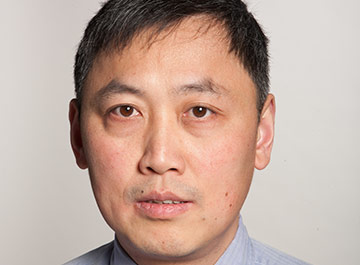 John Cijiang He, MD, PhD, is the Irene and Dr. Arthur M. Fishberg Professor of Medicine and Chief of the Division of Nephrology. Read More

The Division of Nephrology, led by John He, MD, PhD, aims to be a leader in patient care, clinical and basic research, and education.