The Center for Therapeutic Antibody Development has expert assistance available to prepare, purify, and express proteins using methods that maximize native protein folding and stability. In most instances proteins can be produced when given only the genetic sequence of the protein.

The Center for Therapeutic Antibody Development has IACUC approval for the generation of hybridomas in mice, hamsters, and rats. Immunization protocols are selected according to the target immunogen and intended use of the antibody by the investigator. After fusion of B cells to an appropriate immortalized cell line, clones are selected and grown in semi-solid media. Clones are picked and transferred to 96 well plates for screening and expansion of cells.

The screening method will be done through consultation with the investigator. Generally, the screening method is selected according to the assay of interest. If the priority for a successful antibody is use in flow cytometry, then flow is the most appropriate screening method. Other screens could include ELISA and functional screens. Screening can be done using a proxy antigen, which is a recombinant protein typically similar to the immunogen, or using the naturally expressed protein. All clones generated will be cryopreserved for storage for possible future applications.

Antibodies that pass the screening criteria are isotyped and may or may not go through a second type of screening. When the desired antibodies are identified, The Center for Therapeutic Antibody Development will expand the clone and purify the antibody preparations.

Antibodies are unique proteins made by cells of the immune system to protect against repeated invasions by pathogenic microbes. Through their capacity to bind strongly to specific sites on microbes and mediate innate immune effector functions (complement, phagocytosis, ADCC), antibodies are able to specificities eliminate the invader. There are as many as 100 million antibodies with unique specificity within the human body. Each B cell is capable of making one type of antibody, meaning that 100 million B cell clones are needed to make all of the varieties of antibodies in the human body.

While the antibody producing B cells taken from the body are short lived, a number of techniques have been developed to immortalize the cells into antibody producing factories; the most common method is the production of hybridomas. Hybridomas can be grown in industrial size cell culture and the secreted monoclonal antibodies are easily purified from the culture media in almost unlimited quantities.

A Variety of Uses

Almost all rapid diagnostic tests (influenza testing, pregnancy, rapid streptococcus test, etc.) are based upon monoclonal antibody binding. Antibodies used in these types of diagnostics are usually made using B cells from mice or rats. When monoclonal antibodies began to be used in humans to block immune interactions, kill cancer cells, suppress transplant rejection, or relieve autoimmune disease symptoms, it became clear that the antibodies made in species other than human would not be suitable as a result of an anti-species response. In order to be used effectively, methods were developed to humanize the monoclonal antibodies. 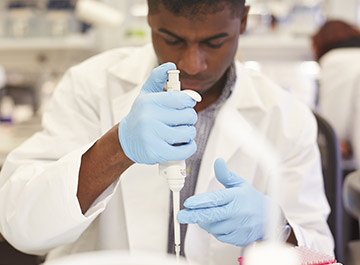 Enabling the translation of basic scientific discoveries into clinical practice

Educational resource to diversify or explore new avenues of research

Accelerating the discovery of human antibodies directed against therapeutic targets