Alison Goate, DPhil, is a renowned neuropsychiatric researcher and molecular geneticist whose pioneering work falls within two areas, broadly speaking: gene discovery and modeling disease mutations. She is best known for identifying the first gene mutation linked to an inherited form of Alzheimer's disease, and for finding that a rare mutation in the PLD3 gene doubles the risk of developing late onset Alzheimer's disease, among other significant discoveries. Dr. Goate was recently awarded a multiyear grant from the National Institutes of Health (NIH) to identify gene variants that protect against Alzheimer's disease—an important new field of research that could herald new ways to exploit the body's natural defense systems to prevent the disease.

Perhaps Dr. Goate's most influential contribution to the field has been the novel methods she used to pinpoint genes associated with Alzheimer's disease. These methods have given other investigators important clues as to how to accelerate their own research. In the first stage of her study that led to the discovery of the PLD3 gene mutation, for instance, she sequenced all the protein-coding genes from several individuals in 14 families using a technique called whole exome sequencing.  In another well-designed study, a team of researchers led by Dr. Goate performed the largest ever genome-wide association study of protein markers found in cerebrospinal fluid, which led directly to the discovery of three new genetic variants that may indicate the presence of Alzheimer's disease.

Dr. Goate has published more than 500 papers in major journals including Nature, Science, Nature Genetics, Neuron, Proceedings of the National Academy of Sciences, Molecular Psychiatry, and Biological Psychiatry. She has won multiple awards for her work including the Khalid Iqbal Lifetime Achievement Award in Alzheimer’s Disease Research from the Alzheimer’s Association in 2015, and was elected to the American Association for the Advancement of Science in 2012. In 2016, Dr. Goate was elected to the National Academy of Medicine.

In her role as Loeb Center Director, Dr. Goate works synergistically with cross-disciplinary experts across in the Mount Sinai Health System, including our National Institute of Aging-funded Alzheimer's Disease Research Center, directed by Mary Sano, PhD, and the Center for Cognitive Health, directed by Sam Gandy, MD, PhD. 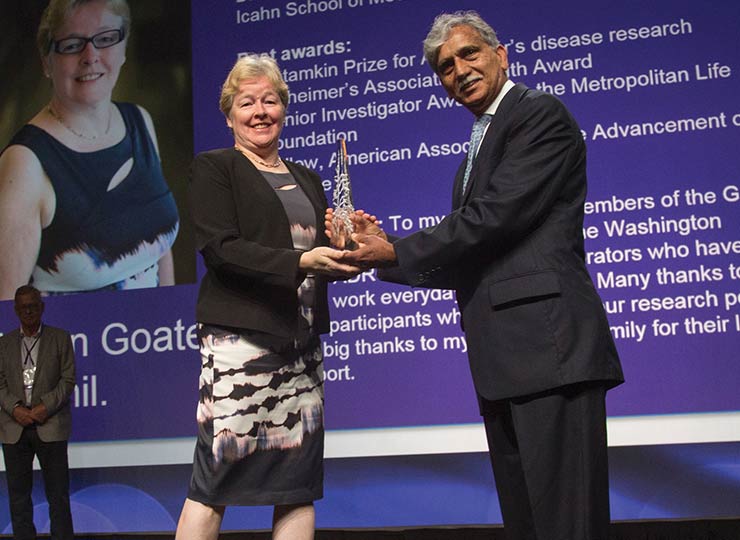 Our director is honored with lifetime achievement award

Exploring the realm of human cognition

Promoting health at any age