The first two years offer a broad introduction to the art and science of surgery. Residents learn to diagnose a wide range of surgical problems within general surgery and the surgical subspecialties. While the curriculum emphasizes pre and post-operative management of surgical problems, residents also gain surgical experience under the direct guidance of an attending surgeon.

All rotations are at the Icahn School of Medicine at Mount Sinai, unless otherwise noted.

We have established a two-week rotation in Surgical Pathology for PGY-2 residents. Surgical residents will have the opportunity to work with a Pathology attending and resident in the analysis of surgical specimens, performance of frozen sections and participation in autopsies.

PGY-2 residents will also spend two weeks in Anesthesiology. During this rotation, residents will learn to understand the pathophysiology of pain management, perioperative assessment and principals of airway and intraoperative management.

During the third and fourth years, residents assume increasing responsibility in all aspects of patient care. Third and fourth year residents either act as the senior on a large general surgery service (supervised by a chief resident and attending surgeons) or as the chief resident on a smaller specialty (i.e. Hepatobiliary, Thoracic, Cardiac, or at an affiliate hospital).

During the chief resident year, residents supervise General Surgery service, charged with the responsibility of patient care and for supervising the junior and senior residents below them. Chief residents perform a wide range of surgical procedures under the supervision of an attending surgeon.

The Icahn School of Medicine at Mount Sinai General Surgery Residency Program has affiliations with several premiere healthcare institutions in the New York metropolitan area. Each partner excels in distinct specialties to create a unique program that offers broad-based training in a VA facility and a city hospital. Together, these different environments complement the tertiary care experience gained at Mount Sinai.

Elmhurst Hospital Center (EHC) is a completely modernized facility which serves as the major tertiary care provider in the borough of Queens. The 545-bed hospital is a highly-regarded Level I Trauma and Stroke Center. In 2013, EHC received close to 700,000 ambulatory care visits and over 130,000 Emergency Room visits, making it one of New York City’s busiest ER and trauma centers. Elmhurst is a premiere health care organization and a regional referral center for trauma services, cardiac catheterization, neurosurgery, Adult, Adolescent, and Pediatric psychiatric services and rehabilitative medicine. Designated as an American Cancer Society (ACS) Teaching Hospital, Elmhurst Hospital Center serves an area of nearly one million people in one of the most ethnically and linguistically diverse communities in the United States. Patients come from across the globe, speaking a multitude of languages and dialects and bringing with them their particular beliefs and customs. Elmhurst is responsive to their needs, and makes every effort to alleviate cultural barriers and to ensure that its patients are provided with the quality healthcare they deserve. Culturally-sensitive care is a hallmark of its highly-regarded Mental Health Services.

A four-week elective rotation has been implemented for the PGY4 categorical residents, allowing them the opportunity to explore their personal interest in other surgical specialties, either within Mount Sinai or outside institutions, in the setting of their choice. Examples of elective rotations have included Thoracic, Trauma, Endocrine, and Transplant and Colorectal surgery.

As part of our residents’ training, during their PGY-3 year they spend 1 month on a clinical rotation in the Dominican Republic. Senior surgical residents can operate in an environment culturally and socioeconomically distinct from their own. Here, they learn to observe, appreciate and ultimately incorporate valuable skills and lessons into patient care. This opportunity also allows senior residents to contribute to the global community as humanitarians.

Our institution provides an ongoing clinical rotation in which surgical residents rotate on a routine basis to a rural hospital in the Dominican Republic. The local population benefits from the medical care provided by these residents. At the same time, the residents themselves benefit from working in an environment with limited resources distinctly different from their own, allowing them to improve their surgical and medical skills.

The Kyabirwa Surgical Facility in Uganda

More than 5 billion people worldwide do not have access to safe or affordable surgical care. That lack of care is responsible for upwards of 17 million deaths per year, meaning nearly 30 percent of the world’s population will die from diseases that are surgically correctible.   Often, the most commonly cited reasons for not providing surgical care to underserved areas is cost and ease of operations; the practice of surgery and organization of providing surgical services is seen as too expensive and complicated to undertake.

The Mount Sinai Global Surgery Team, part of the Department of Surgery at Mount Sinai, is directly challenging those misconceptions by building the Kyabirwa Surgical Facility (KSF), a first-of-its-kind ambulatory surgical facility in Kyabirwa, Uganda. The surgical care provided at the KSF will completely reshape how Kyabirwa residents and those in neighboring villages receive health care. 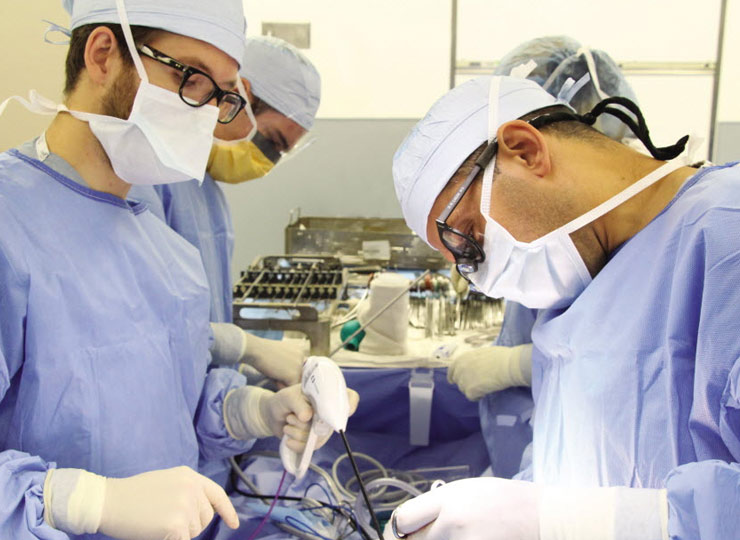 Expertly performing all types of surgery, including open and minimally invasive procedures